Home / News / Alstom TM2 Steam Turbine Case: Why maintaining your machinery is the only option

When a company depends on large machinery, e.g. for generating electricity, it is never safe to gamble on the health of these machines. Steam turbines need to go into maintenance occasionally. Maintenance Partners France recently solved complex problems for a company that tried to push the limits of an Alstom TM2 Steam Turbine.

MP France, the French branch of Maintenance Partners, is located in Nantes and employs close to twenty people. The unit that joined the MP family in May 2016 is specialized in steam turbines and is, just as big brother MP Belgium, not only a partner in maintenance to its customers but also an expert that can identify and resolve complex problems.

The Alstom TM2 steam  turbine that would be subject of this maintenance is an atypical machine. It has two rotors, one high pressure and one low pressure, and is mounted in a barrel.

The machine needs to be mounted in a specific way and to assemble it special tools are needed. In addition to the atypical design of this turbine, the Alstom TM2 is characterized by the honeycomb packing seals that are used to avoid steam leaks and provide a very good efficiency. These seals require adapted start up procedures when they have been replaced. 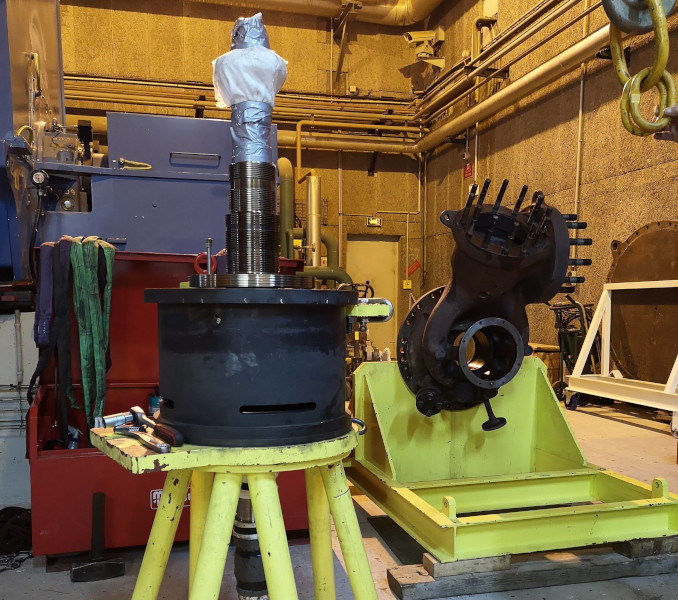 A company, that has been a customer of MP France for over 10 years, was contacted in 2017 about the six-year maintenance of their Alstom TM2 steam turbine that was due at the beginning of 2018. The customer however decided to postpone this overhaul.

The last major overhaul on the customer’s Alstom TM2 was performed in 2011. By postponing the next overhaul, the customer took a risk that was strongly advised against by the engineers at MP France. In addition, the customer was also late in ordering the spare parts. These two risk factors combined resulted in a machine shutdown due to high vibration and a long-term shut down.

In the beginning of 2018, the customer contacted MP France about vibration problems. They didn’t want a large intervention at that time either, so MP fixed as much problems as possible without opening the machine. The customer was told about the importance of opening everything up to do the complete maintenance. As the client refused, three or four small interventions were done, but at a certain point the client had no other option than to open up the machine and do the major overhaul they were contacted about the year before.

When the machine was eventually opened, MP France found a lot of problems. One of the main issues was the alignment of the bearings and the internal parts.

Also, the turbine supports did not stand evenly on the  foundation. This also contributed to the vibration problems. The rotors, diaphragms and bearings were shipped to the workshop in Zwijndrecht for inspections and thorough corrections. The rotating parts were balanced at nominal speed in MP’s high speed balancing machine.

In meantime, the team on site fixed the problems with the turbine supports. The entire turbine was reassembled at the customer’s location and a successful commissioning and start up was done.

This case clearly shows that postponing minor or major overhauls  and delaying spare part orders can cause more problems and lead to more costs than it saves. Another conclusion can be drawn as well:

It is one thing to perform maintenance on a machine that functions well, but it’s a completely different story to do it on a machine that doesn’t work properly. Maintenance Partners has experience In both fields. It performs the easier replacing of parts to prevent issues on working machines, but also the much harder job of locating problems and solving them.

For more information about maintenance, repairs or overhauls of steam turbines and other turbomachinery, call us at+32(0)35417140 or send us a message using the form below: